The 7th Annual Bellingham Northwest Wine Competition was another record-breaking event! 103 wineries from Washington, Oregon, and Idaho entered 482 wines in this year’s competition, held over a four-day period that concluded on July 9, 2022. The number of wines easily bested last year’s previous record total of 351 entries.

Wineries were rewarded with an amazing and well-deserved 154 Double Gold medals. A Double Gold is achieved when each of the four judges on the tasting panel awards the wine a Gold medal, making it a unanimous choice.

Although he’s been making the Pinot Gris-Viognier blend since about 1998, Wolfe says he’s always hesitant to enter it in a competition because the blend (the 2021 vintage was 50/50) usually doesn’t fit neatly into a judging category.

But the wine has always been a favorite among consumers. In fact, it’s become so popular Wolfe has steadily expanded his original production of 100 cases to last year’s highest level: 3,500 cases.

With the 2021 PGV scored as a “favorite” of this year’s judging panel as well, it becomes the first white wine recognized as an outright Best in Show winner in the Competition’s history.

In addition to his 98-point Best in Show PGV, Wolfe also received a remarkable six Double Golds and three Golds for his other nine entries.

The Whatcom Beer and Wine Foundation is pleased to announce that next year’s 8th Annual Judged Competition will move from Bellingham to Walla Walla and become the Pacific Northwest Wine Competition. The event will continue its tradition of honoring the region’s top wines while raising funds for its designated beneficiaries. More details to follow in the months ahead.

The Whatcom Beer and Wine Foundation is pleased to announce that the dates have been set for their 7th Annual Judged Competition.

The 2022 event will take place over two weekends, July 1 and 2 and July 8 and 9, at North Bellingham Golf Course and 9Restaurant.

“We anticipate somewhere between 400 and 500 entries in this year’s competition,” said Foundation President Dan Radil. “That would make this the largest event in our seven year history.”

The competition is open to all wineries in Washington, Oregon, Idaho, and British Columbia. Medals and point scores will be released on July 14, 2022. Any wine winning a Gold or Double Gold medal will automatically qualify for the Great Northwest Wine Platinum Judging, normally held in October.

Applications will be accepted after April 1, and are available on the Foundation’s website.

All net proceeds from the event will be distributed by the Foundation to this year’s beneficiaries: Alzheimer’s Association – Team Joy, Blue Skies for Children, Our TreeHouse, and the WSU Enology and Viticulture Discretionary Fund.

The 2021 Bellingham Northwest Wine Festival Judged Competition was one for the record books! It featured a record number of entries, participating wineries, and Gold and Double Gold medalists. It was also capped with a pleasant surprise: the Best in Show award for the top point-receiving wine ended in a tie.

Our sixth annual event took place at the Four Points by Sheraton Bellingham Hotel and Conference Center on July 3, 9, and 10, 2021. 351 wines from Oregon and Washington were blind tasted by a panel of seven judges over the three-day period.

Best in Show honors were shared by a Washington red and a Washington white wine; the Callan Cellars 2019 GSM from Woodinville winemaker Lisa Callan, and the Longship Cellars 2020 Mind and Memory Sauvignon Blanc from winemaker Kyle Welch in Richland.

There were plenty of other notable award winners, with seven wineries earning three or more Double Golds (unanimous gold scores) from the judges.

For a complete list of medal winners go to: https://www.whatcombeerandwinefoundation.org/medalists

A record-setting 274 wines were entered in the competition. The panel of judges awarded 18 unanimous golds (Double Gold) and 65 Gold medals.

For a complete list of 2020 Medal Winners please go to:

The 2020 Bellingham Northwest Wine Festival, originally scheduled for Saturday, July 25, has been cancelled due to COVID-19 restrictions and out of concern for the safety and health of all wineries, guests, and volunteers who would be involved in the event.

The good news is that the judged competition portion of the Festival will proceed as scheduled. Wineries have until July 3 to submit their wines for judging. All medal-winning wines will be announced on July 25.

For complete information, please visit our web site at:
https://www.whatcombeerandwinefoundation.org/awards-and-judging

The 2019 Bellingham Northwest Wine Festival turned out to be the biggest and best event in the Festival’s four-year history.

Over 500 attendees filled the Four Points by Sheraton Ballroom and were treated to over 225 wines from 61 different wine labels from Pacific Northwest wineries.

For a complete list of the medal-winning wines, go to www.BellinghamNorthwestWineFestival.com

Get ready for THE premiere food and wine tasting event in Northwest Washington!

The Festival returns to the Four Points by Sheraton Grand Ballroom in Bellingham and will include up to four hours of tasting, medals and Best in Show presentation from an earlier judged competition, a silent auction of wine-related items, and an order desk for post-event purchases of your favorite Festival wines.

Expect the same impressive tasting list from up to 55 Pacific Northwest wineries, along with passed appetizers and small plates from eight Whatcom County restaurants, plus two distilleries and one brewery. This is a culinary extravaganza not to be missed!

Complete information including ticket purchases can be found on the Festival web site at www.BellinghamNorthwestWineFestival.com

Festivalgoers also had the chance to taste a number of delectable food samples from eight Whatcom County restaurants as well as beer tastes from Bellingham’s Stones Throw Brewery and spirits from Fremont Mischief Distillery and Paraty Spirits.

In addition, the evening included a medal presentation from an earlier judged competition that included 22 golds, 3 double golds and the Best in Show award which went to the Hedges Family Estate 2016 Syrah.

For a list of all of the 2018 medal winners go to www.BellinghamNorthwestWineFestival.com

The newly-launched Discover Washington Wine web site is up and running and should serve as your go-to reference point for information about all the State’s wine regions, wineries, and tasting rooms.

The site provides you with an alphabetical listing, by city, of every winery in Washington. This is an invaluable tool for Northwest wine lovers planning to travel or who’d like to recommend wineries to others in a specific geographic region.

There are also some great articles focusing on all things wine-related including features on varietals, vineyards, winemakers, and much more.

By all accounts, the 2nd Annual Bellingham Northwest Wine Festival was a huge success. Over 400 attendees filled the Grand Ballroom of the Four Points by Sheraton Hotel on August 5, 2017 and were treated to an incredible array of good food and excellent wines. 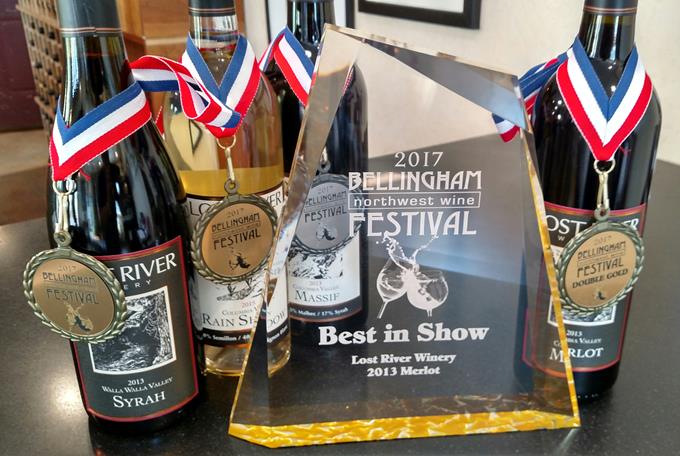 For a complete list of medal winners visit www.BellinghamNorthwestWineFestival.com